Rabbits are very social animals and should therefore be kept in a group. However, if they are not neutered, there can be a whole host of problems between them.

Individually raised rabbits, especially males, can be very aggressive towards the breeder or other rabbits. Females are often aggressive during heat. Keep in mind that they come into heat every 26-28 days, so this is a fairly regular affair. Often in heat, they pluck their hair and build a nest. If you have a mixed couple, have both individuals neutered so that they can have a nice and harmonious life together. If you breed a neutered female, then the unneutered male will try to cover her. This can stress the female and lead to mutual fights. Conversely, if you castrate only the male and do not castrate the female, she may suffer from a false pregnancy. He will probably be aggressive as well. At the same time, you risk her premature death due to uterine cancer. Even among castrated individuals there may be signs of sexual behavior. But these are rather manifestations of dominance than reproductive activity and it is a completely natural behavior, especially in females. 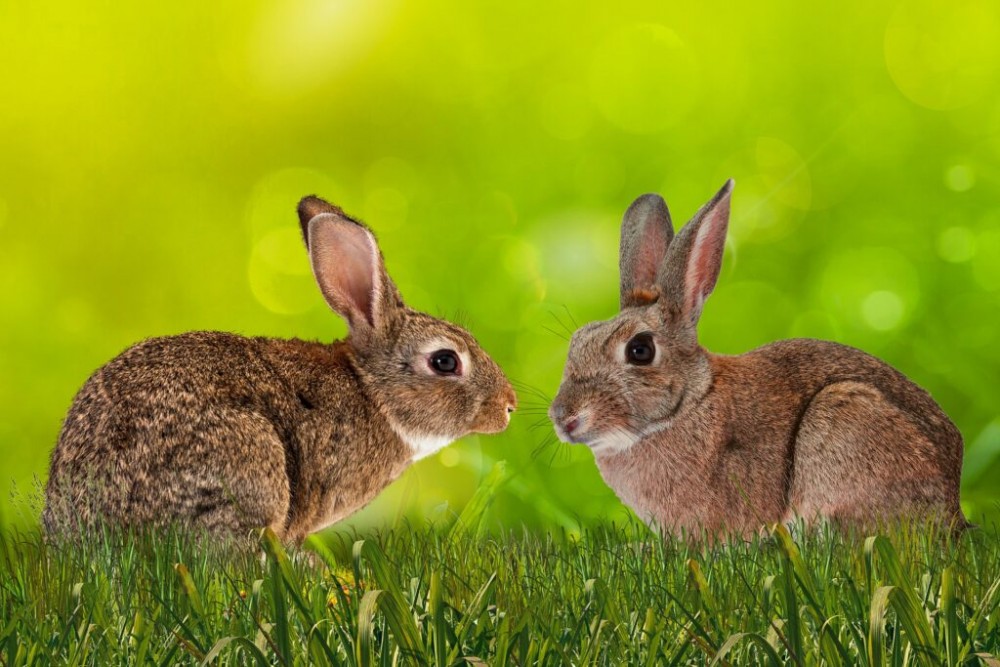 One of the main reasons to neuter rabbits is to prevent unwanted pregnancies. It is not for nothing that the statement is used: " They multiply like rabbits". Rabbits are very prolific and breed really fast. If they are kept in a group, it is very common for them to cover the female with the male a few hours after giving birth. Immediately after castration, the female is infertile, but males are able to cover the female for 6-8 weeks after castration. This is because the mature sperm could leave the testes and enter the vas deferens, where it can survive for a surprisingly long time. Therefore, it is better to keep a freshly neutered male in isolation from unneutered females for at least 6-8 weeks.

Another reason for neutering rabbits is their safe pairing or group formation. Rabbits can be very lonely if kept alone. We therefore recommend keeping two rabbits together in a pair or more rabbits in a group. Hormonal activity in non-castrated rabbits fluctuates greatly and fights between them are therefore very frequent. It is also for this reason that we recommend castrating rabbits.

Prevention of unwanted territory marking by males or false pregnancy in females are other reasons for castration of rabbits. 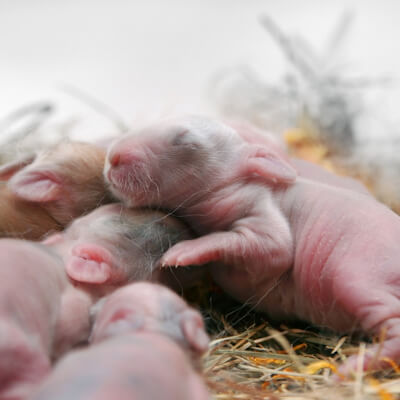 When to neuter a male rabbit

Male rabbits can be neutered from 10-12 weeks of age, or after the testes descend into the scrotum. In such a case, it can be placed directly with other domesticated rabbits without the risk of unintended covering of unneutered females. If you have him neutered later, the males are not sterile immediately after the procedure, as already mentioned in the text above. Castration of males is a relatively simple performance.

When to neuter a female rabbit

Females are neutered from the 4th to the 5th month. This is a more demanding surgical procedure. If you keep a female with an unneutered male, you can put them together right away, but only if the male does not attack the neutered female (he could injure her postoperative wound). Otherwise, keep them in separate areas for a few days. This allows them to see and sniff each other, for example through wire mesh.

We always perform the neutering of rabbits in the Vethope veterinary clinic under a gentle general inhalation anesthesia SAFETY+. Healthy rabbits normally tolerate it well and begin to eat immediately after waking up. The benefit of neutering therefore far outweighs the risk and possible complications associated with anesthesia and surgery. 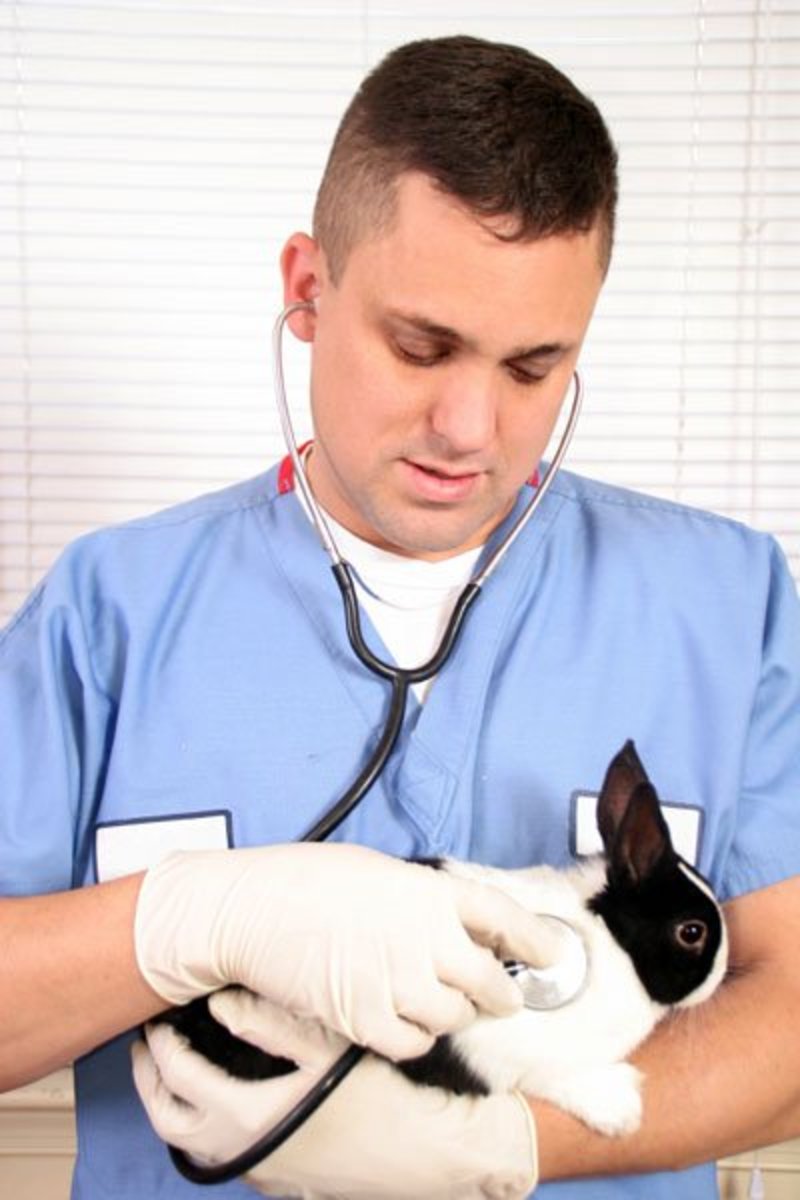 Care of the rabbit before neutering

Do not make any changes to your diet a week before the planned surgery. The rabbit is unable to vomit, so we do not require fasting before the procedure, as is the case with dogs and cats. They must have good quality food and access to water at all times before and after surgery.

After neutering, we recommend keeping the rabbit in a cage, usually for 2 days for males, 5-6 days for females. Males generally cope well with the operation, but females may be more restless on the day of the procedure. The most important thing is that they start eating as soon as possible after the operation. Offer them freshly picked grass or herbs and good quality hay. If the rabbit does not accept food by the next day, be sure to contact the veterinarian. Also, monitor the rabbit's stool for several days after the operation - it must poop regularly. If a few hours after returning home the rabbit produces little or no fur, contact your veterinarian again.

Disclaimer: This article is only informative and does not replace professional consultation or examination of the animal by a veterinarian. If you have any doubts about health of your pet, contact yours veterinarian immediately.

Sign up for a PAC-A-PUSU e-magazine and get practical information and curiosities from the pet world.

We use cookies to personalize content and ads, provide social media features and analyze our traffic. We also share information about the use of our site with our social media, advertising and analytics partners. They may use the data together with other information they collect about you while using their services.

It is used to obtain data to display relevant advertising based on browsing of individual products and product categories.

It is used to collect browsing data, and based on this data, pages are typically modified to make them more accessible, user-friendly and reflective of the user's goals.

It serves as a basis for customizing the page to the user. This data allows the site to display the components you use or find useful based on your work with the site.

Necessary data for the smooth functioning of the site. This data can be used to set up the basic elements of the website. There is no need to consent to the collection of this data, you give your consent by using the site.

Cookies for proper functionality across the site. Validity: for the time of session

Necessary data for the smooth functioning of the site. This data may be used for logging into various sections of the site. There is no need to consent to the collection of this data, you give your consent by using the site.

Deny all
Show details
Allow all